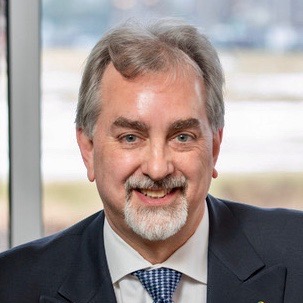 Rick’s path toward a successful career in public relations came about in part thanks to the U.S. Postal Service.

“After a brief career in radio, I was seeking new challenges. One day, I received a postcard from Glassboro State College that promoted the school’s graduate public relations program,” he recalls, adding that he enrolled in a few courses, took the grad school entrance exam and then matriculated into the major. “The program taught me the value of research, planning, concise writing, leadership engagement and much more.”

That led to a master’s degree from what is now known as Rowan University, and the Central Pennsylvania native went onto to work there as an adjunct professor for seven years. Along the way, he became president of the Philadelphia Chapter of the Public Relations Society of America and founded his own digital public relations agency, Tara Communications.

Those are just a few of Rick’s accomplishments and credentials. For instance, he also has:

“One of my passions is helping aspiring public relations practitioners obtain the tools they need for a career in the communications profession,” says the Gloucester County resident, who has helped hundreds of students obtain mentors, internships, networking opportunities and conference funding.

For 24 years, Rick often could be found on the soccer field – where he led youth teams in Washington Township, N.J.to more than 200 wins.

He’s also a film buff, and particularly likes works produced in the late 1930s and early ’40s. He’s watched every film that has won an Oscar for Best Picture, and has set out to watch the American Film Institute’s 100 Greatest American Movies of All Time.