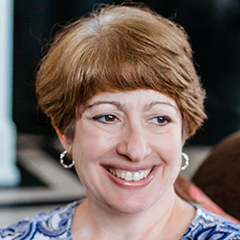 Born into a family of artists, graphic designers, writers and photographers, this New Jersey native always knew she would pursue a career as a creative professional.

“I wanted to be in communications since high school,” says the lifelong resident of Freehold in Monmouth County. “I started a youth-run municipal access TV show called ‘Focus on Freehold’ and have been hooked ever since.”

After she graduated from Rowan University (B.A.) and Widener University (M.A.), Stacey’s initiative and creativity led her to work as a radio news anchor/reporter for stations in New Jersey and Delaware. She also contributed to The Associated Press radio network. But telling stories in only 30 seconds wasn’t enough, so she moved on to working as a communications specialist for universities in her home state and Pennsylvania (Rutgers and Widener among them).

Later, working for the Boy Scouts of America was a natural transition for Stacey, as she had spent many years as a local volunteer for BSA. It was there that she told the dramatic story about a Boy Scout who saved the life of a stranger.

Her talents extend beyond the communications and marketing fields. She owned and operated a cake-decorating business – think “Cake Boss,” but on a smaller scale.

Stacey is most proud of her three sons: one who aspires to be a software engineer, one who wants to be a veterinarian and another who is aiming for a career as a microbiologist and classical musician.