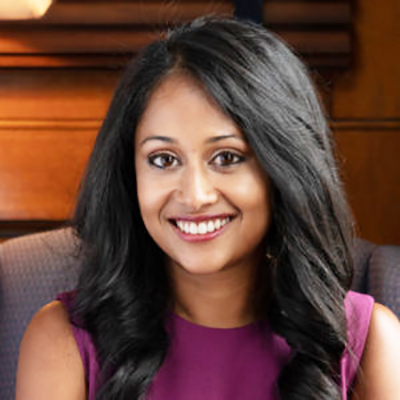 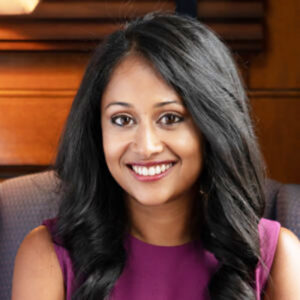 Natasha Alagarasan is used to asking lots of questions and probing details before crafting a narrative. She brings over 15 years of experience in journalism and communications to the PSC team, a decade of which was spent in New York City television newsrooms.

At NY1 News – where she previously accumulated experience as a writer and control room producer, associate producer and fill-in executive producer in the general news division – she senior produced the popular primetime show The Call. The New York Press Club awarded the show’s “New Yorker of the Year” special, which Natasha executive produced, the Rev. Mychal Judge Heart of New York Award.

“In broadcast journalism, we delve into the details but are then afforded a short amount of time to convey the story,” Natasha said. “Deciding which highlights to keep or dispense was a weighty burden but a valuable learning experience.”

Her career in news and production was launched in the prestigious NBC Universal Page Program at 30 Rock fresh out of Rutgers University, where she had earned her baccalaureate degree double-majoring in Political Science (with honors) and Journalism and Media Studies (with high honors). She sharpened her production skills at MSNBC as a production assistant in Dayside News, including stints as an anchor producer and tape producer.

However, after more than 11 years working in New York City, including a stint at Google as a Project Manager, she found her Jersey roots calling her home. In 2018, Natasha joined Governor Philip Murphy’s administration as Deputy Director of Communications at the NJ Department of Human Services. There, she helped spearhead the communications function of the state’s largest agency serving one-fifth of all New Jerseyans and one out of every three children. Her service included one year of shepherding the department through the COVID-19 pandemic and making the public aware of cost-free vaccinations covered by NJ FamilyCare and subsidized childcare for working parents.

From disseminating information on NJ SNAP and other programs to combat hunger and food insecurity to promoting the department’s supportive services to individuals with disabilities, people coping with addiction or mental illness, and seniors; from the promotion of low-cost or free healthcare coverage available through NJ FamilyCare to making outreach to immigrant populations eligible for public assistance, Natasha was deeply fulfilled by promoting critical DHS initiatives in service to vulnerable populations.

As a brand ambassador for her clients, Natasha enjoys playing journalist in getting to know them and their needs intimately (seeking to understand) before developing their messaging strategy (seeking to be understood). “When pitching reporters on behalf of a client, I draw upon my years as a journalist to view the issue through (their) lens and offer something of value,” adds Natasha.

Natasha is a proud Jersey City resident, where she lives with her husband, Raj, and two children, Leo and Liana. She is an avid traveler culinary enthusiast and wine aficionado.